In numerous papers on Genet's theatre and as the co-editor of Jean Genet: Performance and Politics Palgrave Macmillan, , Lavery has already proved himself a compelling specialist on the work of Genet. In his most recent book, he develops a theory that he explored earlier in a precedent-setting paper in the Journal of European Studies , "The Politics of the Wound: Jean Genet's Ethical Commitment" According to Lavery, the theatre of Genet aims to wound the audience. The wound that Genet intends to inflict on his audience is metaphysical, just as the cruelty of Artaudian theatre was not meant to be strictly physical.

In his essays on Rembrandt and Giacometti, Genet writes that each individual hides a secret wound that contains the root of his identity and that the only possible communication between individuals consists in recognition of each other's solitude. Lavery links this theory of the wound to a possible political analysis of Genet's late theatre.

He sees the wound as "the catalyst for a politics of radical equality" 4.

Lavery's book is divided into three parts. The first explores the links between Genet's theatre and his political writing. The second part deals with three plays, The Balcony, The Blacks , and The Screens , in relation to their historical and political contexts. Each production analysed in this third part offers further interpretation of a play analysed in the second part.

At the end of the book, there appears, for the first time in English, the preface to The Blacks , which Genet wrote in but never published. Genet's aesthetic theories are less well known than his theatrical work, and thus, it is interesting that, often, the most brilliant analyses of that theatrical work stem from considerations of Genet's paradoxical and deeply original theoretical essays. Profound analyses of these two divided texts, by Genet and Derrida, respectively, reveal the complex relationships between the meanings of the two sets of columns. 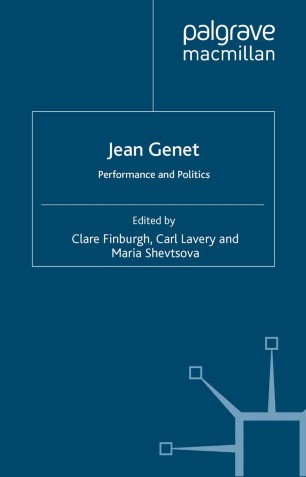 List of figures Acknowledgements Part I Introduction 1. Genet and commitment: politics and aesthetics 2. Tracing the shift: the event of the wound 3.

Aesthetic politics: staging the wound Part II 4. Exploding the bordello in The Balcony: spectacle, allegory and the wound of theatre 5. Bringing it all back home: 'The battle of The Screens' 7.